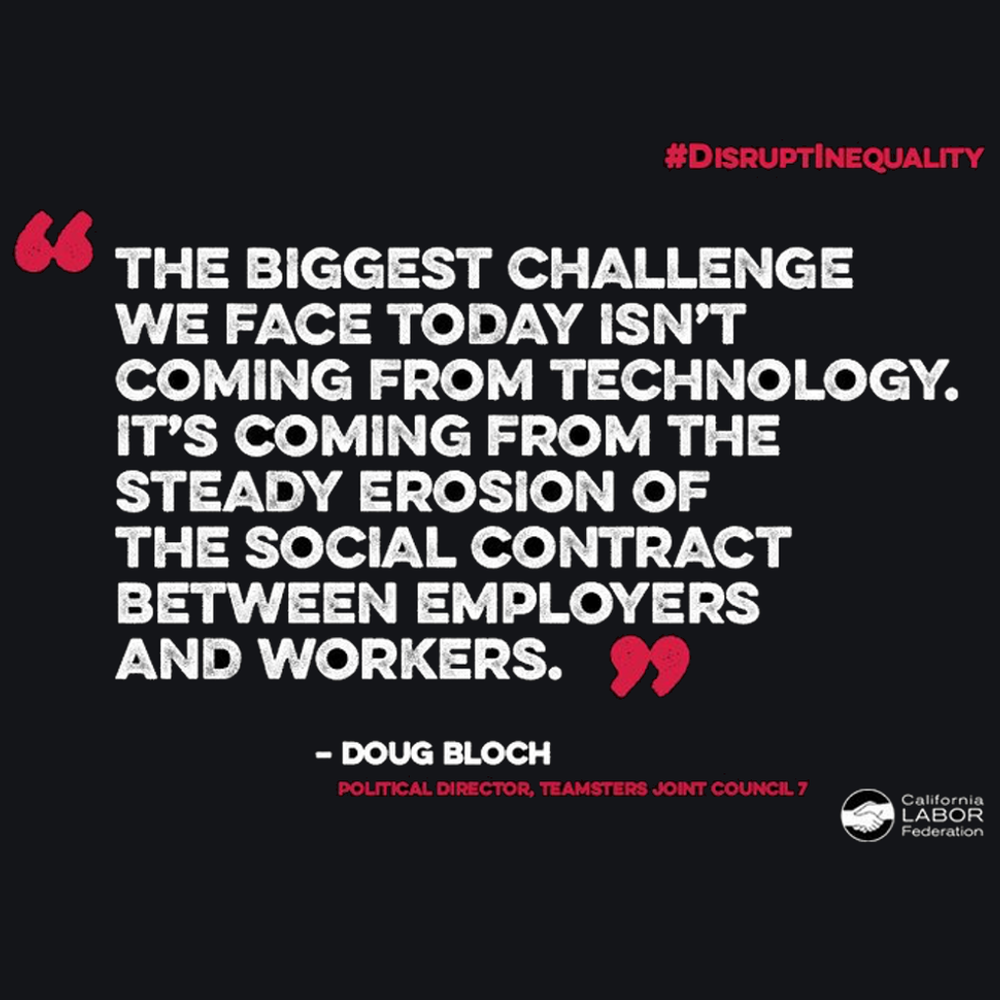 Disrupting markets wasn’t enough. Big Tech is now flagrantly disrupting a century of labor rights victories that were already crumbling under the weight of the gig economy. And these high tech companies are wielding their influence the old fashioned way. Uber, Lyft, Handy, Amazon, TaskRabbit, and more, are investing millions in lobbying in dozens of states to be treated differently under the law than any other company with workers.

They want state laws to classify their companies as “marketplace platforms,” which would then classify any person who works for them as an independent contractor instead of an employee. This classification allows the companies to skip out on paying into the state’s unemployment insurance fund, paying a state-mandated minimum wage, payroll taxes, and overtime. Not only that, but without employees, they no longer have to worry about legal responsibility for workers compensation or sexual harassment claims.

These carve outs in state labor laws create confusion over how a worker should file claims and harms other workers in similar lines of work by putting companies with actual employees out of business.

The tech companies say they are burdened by outdated laws and are being unfairly hit with class action lawsuits. That might be an argument if they were actually providing a true marketplace platform, like The Yellow Pages. But, they’re not.

Rebecca Smith of the National Employment Law Project put it like this, ”Companies like Uber and Handy are not mere marketplaces: They frequently and unilaterally set pay rates, substantially control when, where, and how people work, and impose discipline on those that do not meet rigid standards that they also set unilaterally—just like traditional employers.”

Despite this, these companies have successfully enacted “marketplace platforms” legislation in Arizona, Florida, Indiana, Iowa, Kentucky, Tennessee and Utah. Just last month, the Texas Observer reported that the home cleaning service app Handy hired high-powered, stealth, New York lobbyists who dictated the “marketplace platform” rule to the Texas Workforce Commission without ever having disclosed themselves as lobbyists.

So, why go stealth now? Because workers, unions, and labor rights activists see what’s happening and they’re fighting back. You can help.

Right now, in California, a bill known as Assembly Bill 5 has been introduced to codify the California Supreme Court landmark decision - known as Dynamex. That ruling tightened the legal definition of an employee and would shift thousands of workers from contractor status to payroll-employee status. Help make this law a reality not just in California, but in your state too, by calling your members of congress and getting involved with your state and local labor organizations. Check out the hashtag #YesonAB5 on Twitter for more information.

On the national level, Democrats have been holding labor reform hearings in the House. In the coming months, Senator Bernie Sanders and Rep. Mark Pocan are expected to re-introduce the “Workplace Democracy Act,” which, among other things, narrows the independent contractor standards that harm gig economy workers. Start building the support and buzz now by calling your members of congress and spreading the word.

So, if protecting hard-won labor rights from the greed of Silicon Valley is important to you, be sure to hit the share buttons to spread the word about Stopping Big Tech from “Disrupting” Labor Rights with “Marketplace Platform” Laws via social media so that others in your network can spread the word too.

A company debuting on the public market valued at BILLIONS while its workers protest low wages and working conditions.

I would venture to say that this is not how capitalism is supposed to work. #YesOnAB5 #Dynamex

- Read the bill & join the conversation online via #YesonAB5

- Get involved with your local labor organizations

The Con of The Side Hustle (NY Times)

A Line in the Sand (Workplace Democracy Act) (Jacobin)

Hear the segment in the context of Best of the Left Edition #1263: Worker protections help (almost) everyone (Labor Rights)