Stand with the Indigenous People of the Amazon: Protest, Boycott, Donate and Get Involved in Climate Action 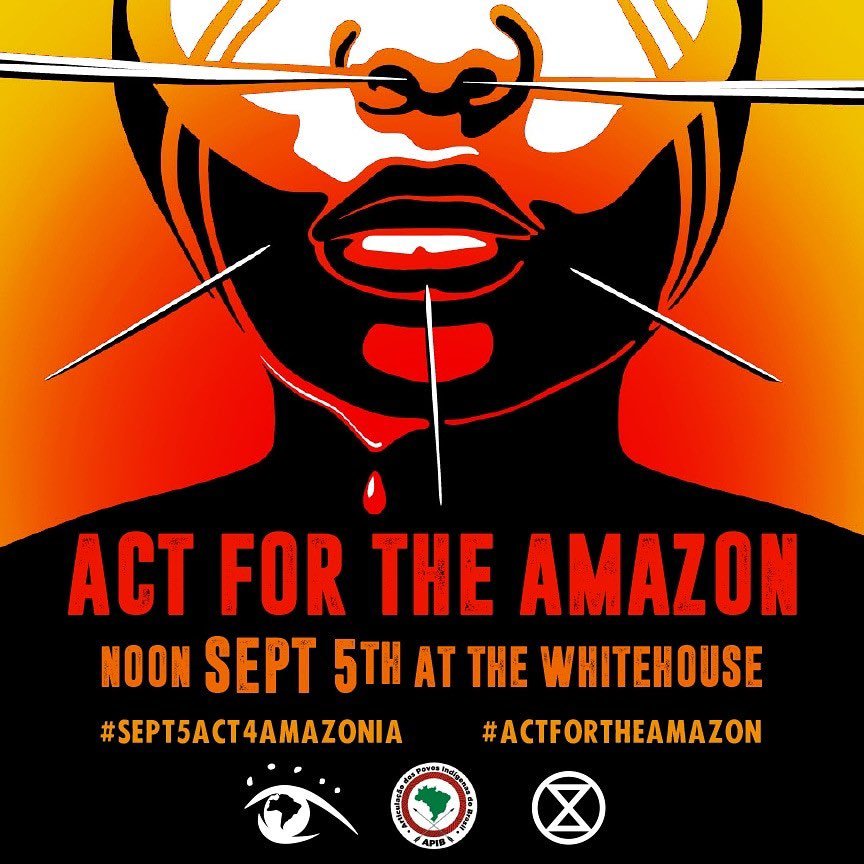 The fires raging in the Amazon are the result of generations of racism, colonialism, and capitalist greed. And the flames are being encouraged and fanned by Brazil’s president: a fascist hell bent on taking Brazil back to a dictatorship. A man who during his presidential campaign promised that “there will not be a centimeter more of indigenous land.”

But the Indigenous people of Brazil have been fighting back. Many different tribes have put aside past differences and joined together as one to protect their home and one of the most important ecosystems on the planet. They are on the front lines, literally risking their lives in the face of fires set by cattle ranchers and deadly militias of illegal mining and logging operators. They need our help and support.

First, take part in the Global Day of Action for the Amazon, or "Act for the Amazon" protests, this Thursday, September 5th, organized by Amazon Watch, Extinction Rebellion, and National Association of Indigenous Peoples of Brazil (NPIB).

Second, you can donate to the organizations supporting resistance on the ground. These include, but aren’t limited to….

Next, if you eat meat, eat less and boycott US brands produced by Brazilian companies that also operate in the US. (Note: Yes, the US banned imports of fresh Brazilian beef in 2017, but the Brazilian beef corporations still operate in the US and also produce US beef brands in addition to Brazilian beef brands. If you buy their US meat brands, you are still supporting that Brazilian beef company doing damage in Brazil and elsewhere. Also, Brazil has been pushing hard to be let back into our market.). By and large, the fires in the rainforest being illegally set by cattle ranchers trying to clear land for herds. And since Brazil is the world’s largest exporter of beef (and it's on the rise), a boycott on that beef and the companies that own those brands is a critical part of any efforts to help the Amazon and the people who live there. Just the fear of boycotts is already working.

And finally, there is no better time to commit yourself to the climate movement. From the fires in the Amazon, to the Adani coal mine in Australia, to Trump allowing oil and gas companies to ravage protected lands, we are at a critical point in our fight for a just, healthy, sustainable future. The Global Climate Strike is taking place from September 20th-27th and we all need to be part of it. Learn more at globalclimatestrike.net.

We'll close with the words an environmentalist and chief of the indigenous Brazilian Kayapó (kai-ya-po) people wrote in an Op-Ed in The Guardian this week:

“For many years we, the indigenous leaders and peoples of the Amazon, have been warning you, our brothers who have brought so much damage to our forests. What you are doing will change the whole world and will destroy our home – and it will destroy your home too.”

So, if fighting fascism, colonialism and climate destruction is important to you, be sure to hit the share buttons to spread the word about Standing with the Indigenous People of the Amazon via social media so that others in your network can spread the word too.

Participate in "Act for the Amazon" protests, Thursday, September 5th

DONATE to organizations protecting indigenous rights and the rainforest on the ground, such as Amazon Watch & Rainforest Alliance

Commit yourself to the CLIMATE MOVEMENT: take part in the Global Climate Strike on 9/20-27th

If you eat meat, east LESS of it and BOYCOTT Brazilian beef companies (Marfrig Global Foods, JBS, and Minerva Foods) that also operate and produce beef brands in the US (Note: The US banned fresh beef imports from Brazil in 2017, but these Brazilian companies produce US beef brands too. Don't support them.) Fear of boycott is already pushing Brazilian companies to put pressure on Bolsonaro. Details in activism blog post.

Here's what you can do to help the burning, ravaged Amazon rainforest (Business Insider)

Naomi Klein: The Amazon Is on Fire—Indigenous Rights Can Help Put It Out (Common Dreams via Boston Globe)

Raoni Metukire: We, the peoples of the Amazon, are full of fear. Soon you will be too (The Guardian)

Hear this segment in context: Edition #1302 Protecting the Amazon Rainforest from a Fascist