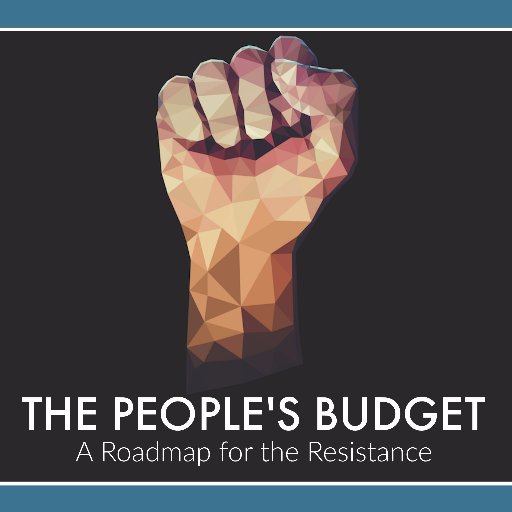 It’s easy to criticize a budget or tax plan entrenched in corruption, cronyism and pandering to corporations and political donors. The op-eds and think pieces practically write themselves. But unless we offer a strikingly better alternative that lifts up all people and proves a peaceful and prosperous world is truly possible, all the criticism in the world will be for naught.

What most people don’t realize is that a guide to that alternative path already exists. The Congressional Progressive Caucus puts out a progressive, alternative budget every year called The People’s Budget. This year’s subtitle is “A roadmap for the resistance.” It’s chalk full of well thought out, progressive ideas that actually work, and the details on how we’ll pay for them.

Here’s just a taste of what it says: It calls or $2 trillion in infrastructure investments to transform energy, water and transportation systems, and $100 billion to increase access to reliable, high-speed internet. It allows states to transition to single-payer health care systems and lowers the cost of prescription drugs. It ends corporate tax breaks for offshoring American jobs and profits. It closes corporate tax loopholes and raises taxes on the wealthiest few and expands the Earned Income Tax Credit and the Child Care Credit. It invests in development of community oriented policing reforms and increased funding for voter protection and legal assistance programs. It funds public financing of campaigns to curb special interests’ influence. It calls for $1 trillion in effective early learning opportunities and a child-care-for-all program. It invests in women, communities of color and their families. It implements immigration reform and includes a pathway to citizenship. It makes debt free college a reality and invests in computer science opportunities for all students. It supports the minimum wage increase and collective bargaining rights. It ends subsidies to oil, gas and coal companies and closes their tax loopholes, while investing in clean, renewable and efficient energy, and green manufacturing. It eliminates veterans’ homelessness and increases their access to mental health care as well as job training opportunities. And it even invests in our defense system while promoting peace, through increasing funding for diplomacy and strategic humanitarian aid, and increased funding for refugee resettlement programs.

And that’s just the tip of the iceberg. In summary, The People’s Budget invests in our country to ensure its people prosper now and for generations to come. Is it perfect? No. But this is the path we want to take. Improvements can and will be made on the way. Head over to CPCBudget.org (or the official CPC website) to read the full budget and share it far and wide. Because of its extreme lack of media coverage, we highly encourage you to write a letter to the editor of local and national media outlets asking them to cover The People’s Budget in depth. If you can, write an article about it yourself. At the very least, share it on social media and talk about it with your family and friends - because if no one knows there is another way forward, we’re stalled before we can even begin.

So, if showing America there is an alternative to Trumpism and heartless Conservatism is important to you, be sure to hit the share buttons to spread the word about The People’s Budget via social media so that others in your network can spread the word too.

.@PPact supports the People's Budget for leading on women's health and making sure low-income women have healthcare pic.twitter.com/YuEDA3Jrgd

Check out The People's Budget at cpcbudget.org and spread the word.

The Democrats are getting ready to govern again (The Week)

Posted May 12, 2017; Written by Best of the Left Communications Director, Amanda Hoffman.

Hear the segment in the context of Best of the Left edition #1103: Freedom isn't free, it's paid for with your taxes