On November 14th & Beyond, Prepare to Stop a Coup in America via Refuse Fascism & Protect the Results 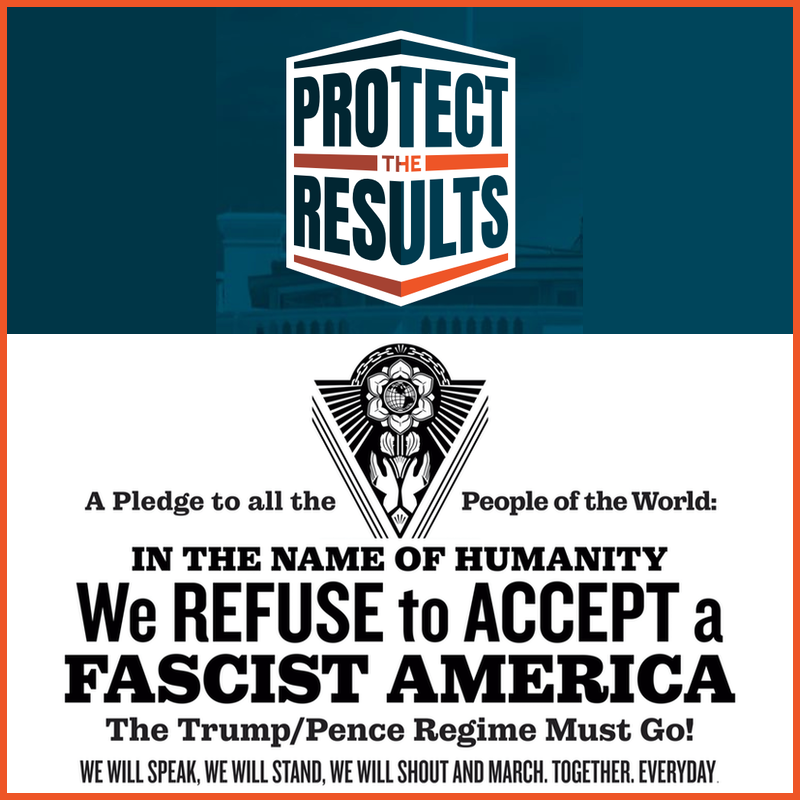 The first thing I’m going to tell you to do today is go read Naomi Klein’s latest article in The Intercept called “Now We Have To Fight Trump’s Tin-Pot Coup - And Biden’s Worst Instincts.” In the piece, Klein lays out five possible reasons why Republicans are echoing Trump’s baseless election fraud talking points. The last reason she lists is that there could be an actual thought-through plot for a coup. Klein notes that the risk slim, but not nil.

Regardless of whether you think Trump’s “coup-talk” is empty bluster, the public threat of a coup (or autogolpe) in America should be enough for us to call it out and prepare for how to stop it. This is a messaging war that we have to win.

Refuse Fascism has planned mass protests nationwide on Saturday, November 14th - and more will likely be planned. You can sign their pledge to the world that you refuse to accept a fascist America and find a protest near you or organize your own at RefuseFascism.org.

Additionally, Protect the Results is still ready and waiting and has moved out some of the dates of their protests. They now range from November 14th to December 1st and beyond, depending on the event. Go to ProtecttheResults.com to find an event or organize your own.

As we watch this all play out, remember the signs of a coup from the Waging Nonviolence article we highlighted a few weeks ago.

We know it’s a coup if the government:

Most coup attempts are secret then happen quickly, but Trump’s slow-walking style means we are able to prepare and that gives us - the people - an upper-hand.

As Klein points out, unrest in one of the world’s largest economies is not good for capitalists and they are the ones actually in control. So, in an irony no one can enjoy, it may be the capitalist monsters who get Trump and Republicans to stop the power grab. But they will only pull those strings if they see that an uprising is inevitable; we need to give a preview to assure them that it absolutely is.

So, if preventing a coup in America is important to you, be sure to tell everyone you know about Preparing to Stop a Coup in America on November 14th & Beyond so that others in your network can spread the word too.

This is no conventional coup. Trump is paving the way for a 'virtual Confederacy' (Opinion - The Guardian)

Tantrum and Theater: Trump's Desperation After Election Loss Isn't Yet a Coup (The Intercept)

Hear the segment in the context of Best of the Left Edition #1380: The Coup Attempt We Saw Coming Years in Advance