What’s After Capitalism? Create Our Next Economy via @TheNextSystem 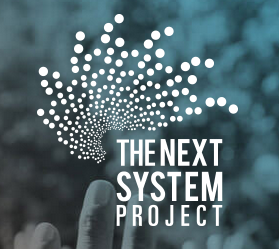 The clips in today’s show couldn’t be more clear: we are living in the death throws of capitalism. And while technology has been able to let us limp along by solving some of capitalisms more dire problems, while exacerbating others, the issues that are left have no quick fix. So, it’s time…probably past time…to ask the question: What’s next?

Luckily, there are people working to answer that question. But they need and want you to be part of finding the solution.

The Next System Project is an ambitious multi-year initiative aimed at thinking boldly about what is required to deal with the systemic challenges the United States faces now and in the future. Working with a broad group of researchers, theorists and activists, they seek to launch a national debate on the nature of “the next system.” Using the best research, understanding and strategic thinking, on-the-ground organizing and development experience, their goal is to refine and publicize comprehensive alternative political-economic system models - fundamentally different from anything we’ve seen before - that are capable of delivering superior social, economic and ecological outcomes.

Admittedly, it's a big task, but ideas with these goals in mind are already being put forth.

In May, the Next System Project released “Principles of a Pluralist Commonwealth” - a project from economist, historian and activist Gar Alperovitz. This is an approach and model that offers a trajectory for wide-ranging institutional change towards real democracy over the long haul, guided by a transformative vision beyond both corporate capitalism and traditional state socialism. You can read this model and request a free copy of it for local reading and organizing groups by going to TheNextSystem.org/principles.

But if you don’t have to rely on economists to propose the next system. You can contribute your thoughts and be part of the discussion about what the next system should be with The Next System Teach-In Initiative. In 2016, teach-ins happened in communities and on college campuses across the country, engaging every day people in a discussion around the new economy and the type of world they want to live in. A complete archive of the resources created for these teach-ins is available at TheNextSystem.org/teachins. So, if your'e in a position to do so, you can go and get those resources and organize a meting in your community today.

The segment notes include all the links to this information as well as additional resources and, as always, this and every activism segment we produce is archived and organized under the activism tab at Best of the Left dot com.

So, if having an economy that works for everyone is important to you, be sure to hit the share buttons to spread the word about Creating Our Next Economy via social media so that others in your network can spread the word too.

The writing is on the wall. The big questions are being asked. Make sure you get a say when it comes to what’s next.

Help find the answer to "What's Next?" with The Next System Project

The Pain You Feel is Capitalism Dying (Joe Brewer, Medium, 2016)

Beyond the Minimum Wage Debate: Let's Move Toward a System That Works for All (Democracy at Work)

Hear the segment in the context of Best of the Left Edition #1123: Preparing for the end of the world, or at least capitalism