What Can YOU Do To Support the #Medicare4All Movement? 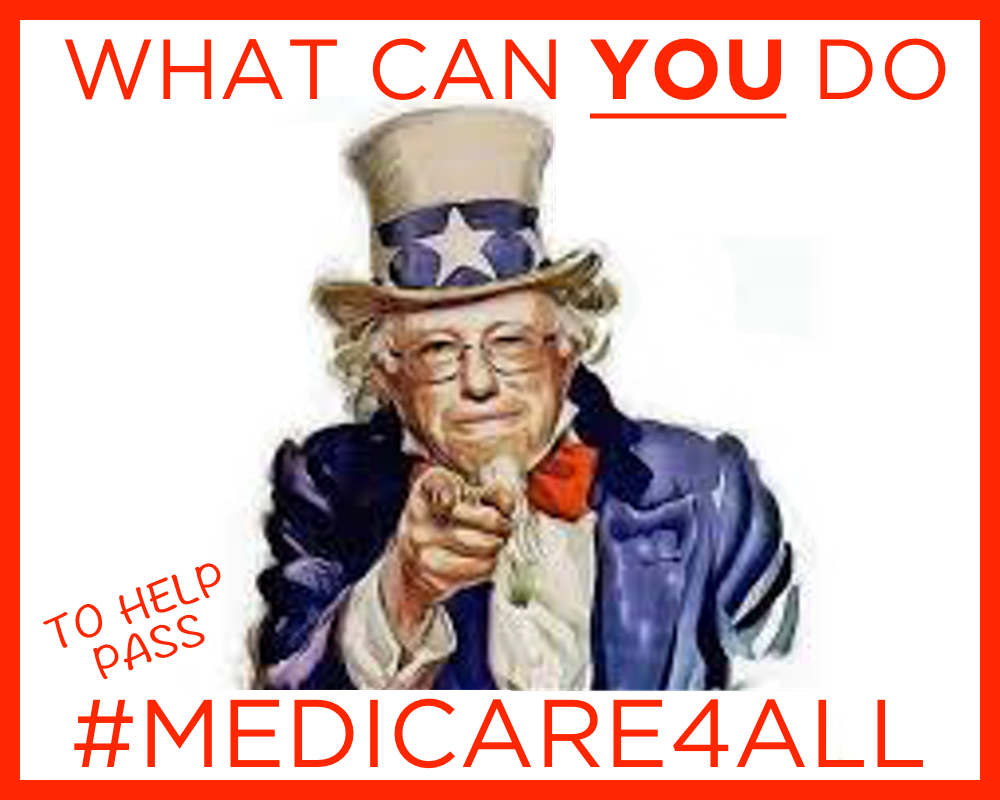 Desmond Tutu famously said, “Hope is being able to see the light despite all of the darkness.”

And it sure has been dark lately. But this month, as historic hurricanes and earthquakes added a new level of panic to an already frightening political landscape, the announcement of Bernie Sander’s Medicare for All bill was a much needed bright spot.

The significance of this announcement is getting lost in the mainstream media news cycle, so let’s lay it out here: This is the beginning of a major movement for a progressive idea that even just a few years ago was still seen as radical in the U.S. but now it actually has a chance at becoming law. It is an idea that will save lives, help counter growing income inequality, save us all money in the long run, and bring us up to speed with other first world nations. It embodies so much of what we stand for as progressives, and that’s why we need to get ready for the long and arduous battle against special interests with power and money to make sure it succeeds.

We’re including links to groups and organizations you should get involved with in the show notes, but right now - other than the hashtag #Medicare4All and the videos Bernie is putting out - there is no formal, interactive, fancy campaign page to send you to yet.

So, today’s activism is going to be a little different than usual. Today, we aren’t going to send you somewhere else, or tell you to call people (that should be a given), we’re just asking you to ask yourself: “What can I do?” when it comes to the fight for Medicare for All.

Maybe you’re part of a church or synagogue or mosque where you have discussion groups. If so, ask them to have discussions about healthcare and Medicare for All.

Maybe you go to every single town hall your politician hosts - and the ones they don’t. Make sure you, your friends and family attend together and put pressure on those politicians to support Medicare for All.

Maybe you have a personal story to share about you, a family member or friend, that illustrates just how much we need a single-payer system in this country. If so, make a video and share it or write about it in a letter to the editor of your local papers - or both.

If you want to start small, have your friends listen to this episode and then organize a get together to talk about it. Try a few different groups of friends or family, and be sure to include those who might not agree with you.

Maybe you’re a great organizer. You can pull together regular Medicare for All support rallies at the statehouse or in front of your representative’s local office and invite local action groups, doctors and nurses, and community leaders to take part.

Perhaps you’re the kind of person who always knows the right people. If you have access to politicians or influential public figures in your community or beyond, use those connections, engage those people on this topic and see if you can convince them to be an ally in this fight in a public way.

Of course, these are all just examples of things you could do. You might come up with something completely different. But all we’re asking is for you to take the time today to think about what you can bring to the table. Each one of us has something to offer in this fight and you don’t need to wait for a campaign to tell you what to do to start making progress. This issue effects every single one of us and it will only be won with a major, overwhelming grassroots movement. That’s you.

There are few opportunities to make such significant, lasting change in this country. So after listening to this show today, make a list of at least 3 things you might be able to do, long term, to help Medicare for All become law. Then, call into our voicemail line at 202-999-3991 to share your ideas and inspire others. Together, we can do this.

So, if you believe healthcare is a human right, be sure to hit the share buttons to spread the word about identifying what you can do to support Medicare for All via social media so that others in your network can spread the word too.

Why does Norway rank so much higher than the U.S. on health outcomes? These Norwegian doctors explain: pic.twitter.com/zfvLEbfQKD

What are the top 3 things you can personally do to contribute to the movement to support #Medicare4All?

Read the details of Sen. Sanders’ Medicare for All bill

Some other ways to get involved:

Health Over Profit (nonprofit grassroots org fighting for Medicare for All)

MoveOn.org Petition (do NOT let signing this be all you do!)

The Loss of Morality in America’s Healthcare Debate (Washington Post)

"Medicare for All": A Uniting Call to Action in the Age of Trump (truth-out)

Hear the segment in the context of Best of the Left Edition #1136: Doing the Right Thing After Exhausting All Other Options (Medicare for All)