Voting Is Not Enough: Protect the Election Results 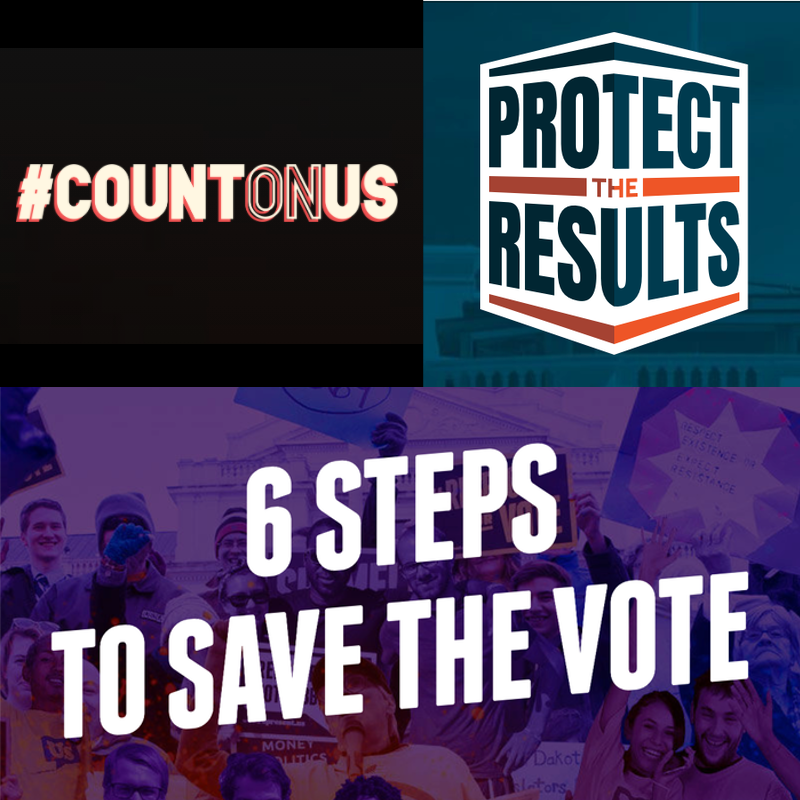 We’re less than 3 weeks out from Election Day, just 18 days left (as of Oct. 16th). And while we’d rather be encouraging you to join get out the vote campaigns and make sure your friends and family are registered and have a voting plan, instead we have to talk today about the big fascist elephant in the room.

We all know that we have severe structural issues to address when it comes to American elections, from voter suppression laws to gerrymandering to the Electoral College. But this year, the threat includes all of those things and something more: the calculated efforts by Trump and the GOP to do everything they possibly can to subvert and sow doubt about the electoral process…and therefore the results.

Trump is loud about his accusations and aspersions, but the GOP is a whole lot quieter - working behind the scenes at the state level and through their judicial picks to manipulate and pull levers we didn’t even know existed until now.

It’s not pleasant to think about worse case scenarios, but the best case is sadly unlikely. We need to prepare now for the reality that things will get messy and understand what our role will need to be as citizens in that moment.

First, we’ll talk about prevention. The nonpartisan anti-corruption organization RepresentUs has launched “Save the Vote”, which includes 6 steps you can take to protect democracy and the first two are key…

Step 1 is to tell your state’s top election official to count every vote before declaring a winner. An unprecedented number of Americans are voting by mail and we are already seeing record breaking voting. Counting every vote may take a while and at no point should it be stopped before completion. Make sure your state isn’t planning to jump the gun before all of the results are in.

Step 2 is demand your state lawmakers respect the vote count. The Atlantic reported that Trump’s campaign has spoken to state legislatures about trying to bypass the vote tally. State lawmakers can prevent this by committing on record to only choosing a winner based on the vote count.

To take immediate action on these steps, go to Represent.us There you’ll also find the other four steps, which include a toolkit to help fight disinformation and lies about safe voting options, confirming you are registered to vote, signing up to be a poll worker, and encouraging everyone to vote as early as possible.

But Trump has already said he’ll only accept the results if he wins, so what do we do if Trump loses but won’t concede?

Protect the Results is a coalition of organizations lead by Indivisible and StandUp America, laying the groundwork for voters to mobilize if Trump does not accept the results of the election.  Events are already being organized by voters across the country on November 4th and you can find one near you or plan one yourself. Go to ProtecttheResults.com to learn more.

And finally, Sunrise Movement has launched “Count on Us”, a plan to defeat Trump and Defend the Election. The campaign is one part get out the vote effort and one part trainings and direct action. And if Trump tries to steal the election, they’re calling for a mass strike, with the idea that Trump can’t govern if the nation’s people are not going to work or school. Go to WeCountOnUs.org to sign up and learn more.

In an article from Waging Nonviolence called “10 Things You Need to Know to Stop a Coup”…because that’s popular reading right now…they point out that “we have to be ready to declare loudly and strongly: this is a coup.” Power grabs don’t have to look like a military coup with the opposition being arrested. If votes stop being counted or the person who lost tries to take or hold power, we have to call it what it is and not shy away from it.

Look, we all hope it doesn’t come to this, but we must be prepared because mass direct action might be our only chance at stopping an attempted coup. Steeling ourselves to be ready gives us a shot if things begin to fall apart.

Every day it just gets more clear: voting is not enough. It’s just not.

So, if stopping an attempted coup in America is important to you (I sure hope it is!), be sure to spread the word about Voting Is Not Enough: Protect the Election Results so that others in your network can spread the word too.

6 Steps to Save the Vote via RepresentUs

Protect the Results via Indivisible, Stand Up America & more

Count On Us via Sunrise Movement

The Election That Could Break America (The Atlantic)

Is Trump Planning a Coup d’État? (The Nation)

What Happens If Trump Won't Step Down? (Slate)

Hear the segment in the context of Best of the Left Edition #1375: The Militia Movement is Having a Moment