Voting Is Not Enough: Help Flip the Senate via @swingleft 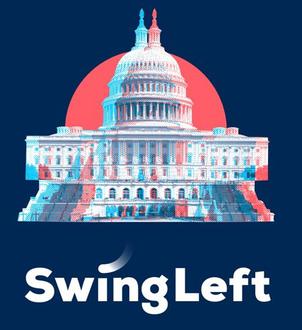 As of the publishing of this episode (Oct. 6th), we have exactly ONE month left until Election Day. Just 28 days.

Visit BestoftheLeft.com/2020action to explore our 2020 Election Action Guide, which we’re calling “Voting Is Not Enough.” Because…it’s just not.

From the last two years of Obama’s presidency through today, we’ve witnessed the true power of Senate control. Besides his unprecedented refusal to confirm Merrick Garland, Mitch McConnell made it his life’s mission to block Obama’s district and circuit judge appointments. Then, he helped Trump ram 50 of them through - many unqualified, including Amy Coney Barrett. Only a tiny percentage of cases get to the Supreme Court and the appellate courts are the filter, making the quality and fitness of those judges critical to a healthy judiciary branch.

It’s not sexy, but the Left MUST care about the courts. The Senate’s control of the judicial confirmation process makes its power immense. McConnell has abused this power to the full extent, subverting the Constitution and trampling norms. If he still leads the Senate under a Joe Biden administration, we know exactly what we’re in for. So, today we are focusing on what it will take to flip the Senate, because - with everything we have to fix and protect and the looming threat of a hard right court - electing Joe Biden without flipping the Senate would be nothing short of a disaster.

The good thing is that the Senate advantage is with Democrats this year, as Republicans have to defend 23 seats - twice that of Democrats.

Swing Left, the political action organization that helped deliver the Blue Wave in the 2018 midterms, has a plan. They call it the Super State Strategy - focusing on 12 states that are each critical to the flipping the White House, the Senate and the state houses key to rolling back Republican gerrymandering.

In addition to volunteering your time with Swing Left to phone bank, text and write letters, you can also donate strategically. Donate to the Swing Left Immediate Impact Fund which sends your donations to the candidates in the closest races among the Super States, or choose a Super State and your donations will support races up and down the ballot in that state. 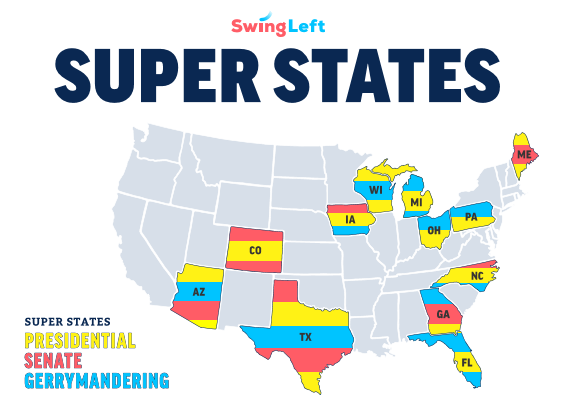 Beyond the Super States, there are some surprisingly close Senate polls coming out of other very red states. The Democratic Senate candidates in Alaska, Montana, South Carolina, and Mississippi are all within 1 percentage point of Republican incumbents in the polls. In Kansas, the open seat Senate race was within 2 points until the Koch Brothers’ group dropped a giant cash infusion. Turnout in these states is key and a little momentum could go a long way.

In terms of defending Democratic seats, Senator Doug Jones will likely lose in Alabama. But in Michigan, Senator Gary Peters only just took back a lead in the polls.

And finally, although Trump’s Supreme Court nominee’s confirmation looks very likely - it’s not a done deal yet. According to Indivisible’s Senate Whip Count, there are still 13 Senators who’s confirmation vote is undecided or unknown. Go to ScotusWhipCount.org to see the latest and use the tools to contact those on the fence.

So, here’s the bottom line: any hope of a real course correction depends on winning not just the White House, but the Senate too. And as long as we do the necessary work, it’s within reach. Don’t wait. Get involved today.

So, if making sure we don’t start the post-Trump era with a lame duck Democratic president is important to you, be sure to spread the word about Helping Flip the Senate via Swing Left so that others in your network can spread the word too.

Learn about the Super State Strategy

Tight Races in Other Red States:

SC: Unseat Graham. Give to Jaime Harrison. (down by 1% points)

MS: Unset Hyde-Smith. Give to Mike Espy. (down by 1% points)

MT: Unseat Daines. Give to Steve Bullock. (down by 1% point)

Democrats Will Be Lost Without the Senate (The Nation)

Mitch McConnell is destroying the Senate - and American government (The Guardian)

The Other Way Trump Could Destroy the Next Presidency (The Atlantic)

Hear the segment in the context of Best of the Left Edition #1372: The Supreme Court. Before, During and After Ruth Bader Ginsburg.