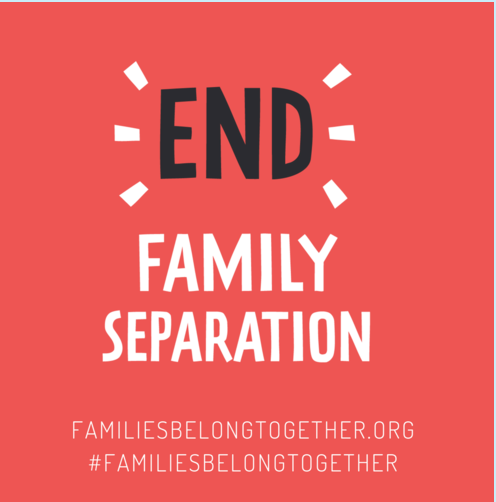 First they came for the immigrants…

The news that children of asylum seekers are being forcibly taken away from their parents by ICE and Border Patrol and then kept in warehouse-style detainment centers around the country sparked an immediate outcry and public demonstrations.

Leading that movement is We Belong Together, a coalition of human rights, civil rights, immigrant rights and women’s rights organizations, which held demonstrations in early June under the banner “Families Belong Together.” They are calling for the end of Trump’s family separation policy and to defund Border Patrol and ICE, and you can find their petition, sharable graphics and protest posters for download at familiesbelongtogether.org.

We now know a little bit more about the treatment of these immigrants. After Senator Jeff Merkely's visit to a facility in Texas, he described children in “dog kennel-style cages, people crowded in with nothing but a space blanket.” Representative Pramila Jayapal met with immigrant women at a federal prison facility in Seattle whose children were taken away at the southern border. They described how agents used excuses, like a photograph or bath, to calmly take their child away. But the child was never returned. Some could hear their children screaming for them from the next room. The mothers are being prosecuted in criminal courts, not immigration courts, before they’ve had their asylum hearings. Many plead guilty to border crossing not fully aware that they now have a criminal record, disqualifying them for asylum - which is, of course, the whole idea.

While we’ve heard crickets from Republicans, Democrats do seem to be mobilizing quickly. Representative Jayapal is leading 108 of her fellow Representatives to demand that Congress stop Department of Homeland Security budget funds from being used for separation practices. In the Senate, California Senator Diane Feinstein and 31 other Senators have introduced the “Keep Families Together Act,” which prohibits any agency form separating children from families, unless it is a case of abuse, trafficking, or neglect. The bill was developed with input from child welfare experts and it’s sponsored by organizations including the Children’s Law Center, the Young Center for Immigrant Rights, and Kids in Need of Defense. That also happens to be a short list of organizations that could really use your financial support right now as they hire lawyers and counselors to help these detained children and reunite them with their families.

In the House, Representative Lucile Royal-Allard of California has introduced two different bills. The first is the renewed Help Separated Families Act of 2018, which aims to protect the parental rights of all immigrant parents, no matter their status, and ensures they have the right resources to try to place their children with family members or other caretakers while they are detained. The second bill is the HELP Separated Children Act, which aims to give certain legal protections to immigrant children separated from their families, allowing detained parents to participate in the family court system and ensuring that parents and children can still visit and contact each other while the parent is detained.

So, call your members of congress today to throw your support behind these bills. And of course, if you live in a red state, your persistent calls, emails, tweets, etcetera, are all the more important.

If keeping families together and protecting basic human rights is important to you, be sure to hit the share buttons to spread the word about Telling Congress to END Family Separation via social media so that others in your network can spread the word too.

Since October, Trump has separated more than 1300 immigrant children from their parents. Come out this Thursday June 14 to say #FamiliesBelongTogether! Find an event close to you: https://t.co/6GPoqsOAjy @familiesbelong pic.twitter.com/xzic9TZulF

The Young Center for Immigrant Rights

Kids in Need of Defense (KIND)

Rep. Pramila Jayapal—‘They Could Hear Their Children Screaming for Them in the Next Room’ (The Nation)

Hear the segment in the context of Best of the Left Edition #1189: Our dehumanizing, traumatizing, child-abusing immigration system