Support the Fight to Oust McConnell in 2020 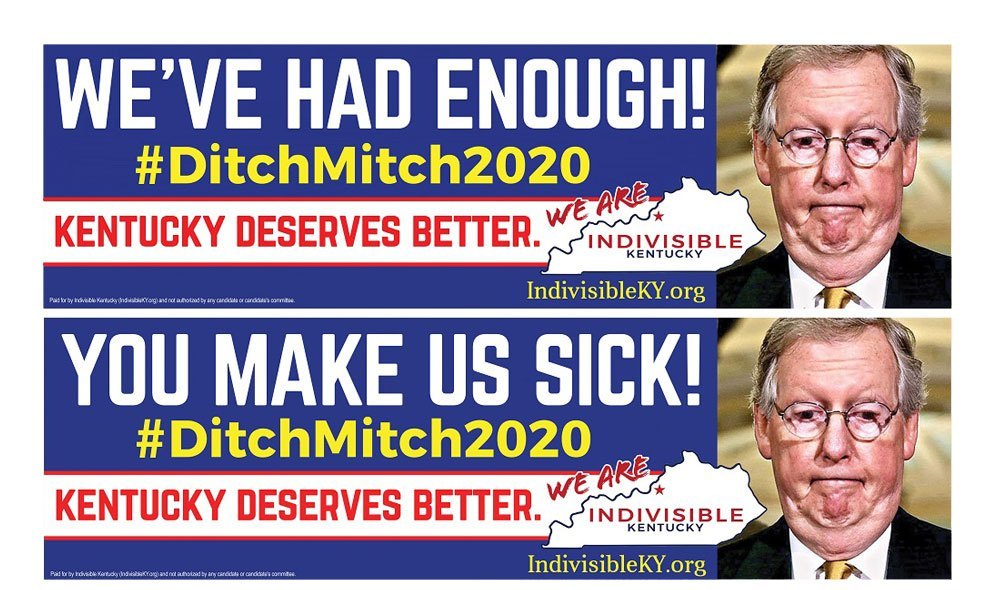 I don’t want to rain on anyone’s parade, but Mitch McConnell has been extremely unpopular in his own state since the last time he won reelection in 2014. So, even though he currently has a 47 percent disapproval rating and a 38 percent approval rating in Kentucky, we shouldn’t give that too much weight when it comes to defeating him in 2020.

And this time, we have a new variable: Trump. Kentuckians give Trump a 53 percent approval rating, making Kentucky ninth on the list of states most approving of him. McConnell has hitched his wagon to Trump so closely in the past two years, you can hardly see where Trump begins and McConnell ends.

And McConnell’s campaign is acutely aware of that. His first campaign ad sprinkles Trump’s praise throughout, while touting how he blocked Merrick Garland’s nomination, got Gorsuch and Kavanaugh’s confirmations through, confirmed 26 hand-picked conservative federal circuit court judges, and falsely frames the tax bill as a win for the middle class and catalyst for good job reports and economic prosperity.

The man has been an effective tool of special interests and wealthy conservatives...at the expense of our democracy and political institutions. That’s the point of the ad: Don’t worry about how Mitch accomplished these things, what’s important is that he delivered.

That’s what we’re up against, and Kentucky political analysts warn that the Democratic base in Kentucky - those that supported FDR, Harry Truman and Alben Barkely - is dying off.

So, how do we beat McConnell? Well, here are the people and groups attempting to do it and their strategies:

A new DC-based PAC called Ditch Mitch has raised over one million dollars very quickly and has already started running ads highlighting McConnell’s fight to destroy the ACA, pointing to data that says the cost of healthcare is an important issue for Kentucky voters.

Indivisible Kentucky has been waving the Ditch Mitch banner it since 2017, when they first ran a billboard campaign in the state with the message “You Make Us Sick” and “Kentucky Deserves Better” with the hashtag Ditch Mitch 2020. Those billboards have started popping up again and we can expect more from this group as we get closer to 2020.

In terms of actual opponents, it’s still early, but a few people have thrown their hat in the ring.

On the Democratic side, healthcare professional Steven Cox, is the only one who has officially declared his candidacy.

However, Senator Chuck Schumer has been trying to recruit Marine Corps Pilot Veteran Amy McGrath. Despite national coverage of her campaign during the midterms, McGrath lost her run for Representative in Kentucky’s 6th district by a slim margin. Some say her loss was partly due to her vow to not run attack ads against her opponent and that she couldn’t win against McConnell with that approach. *UPDATE*: Former fighter pilot Amy McGrath announces bid to take on Mitch McConnell in 2020

Matt Jones, a local sports radio and political talk show celebrity in Kentucky, thinks he is the one that can beat McConnell. Despite his sports background, Jones graduated from Duke Law School and is known as an outspoken champion of worker’s rights with pro-gay marriage, pro-choice, and pro marijuana legalization views. And, he has name recognition.

Mitch will be primaried by C. Wesley Morgan, a former 1 term state Rep and liquor store owner. He says McConnell is a “self-serving senator” who has only moved to the far right because Trump is so popular in Kentucky.

'MONEY' IS THE NAME OF THE GAME

But doing the bidding of special interest groups and lobbyists has put a lot of money in McConnell’s coffers. According to federal campaign records, he’s got millions more cash on hand than he had this time last cycle, and that doesn’t even count millions raised by other groups and super PACs supporting him.

In 2014, McConnell was able to rake in $31 million to defeat Democrat Alison Lundergan Grimes, who raised $19 million. This election is going to depend on deep pockets and McConnell has spent his whole life making sure it stays this way.

Support Amy McGrath (if she announces)

Support Matt Jones (if he announces)

Hear the segment in the context of Best of the Left Edition #1287: Mitch McConnell is the Forking Worst