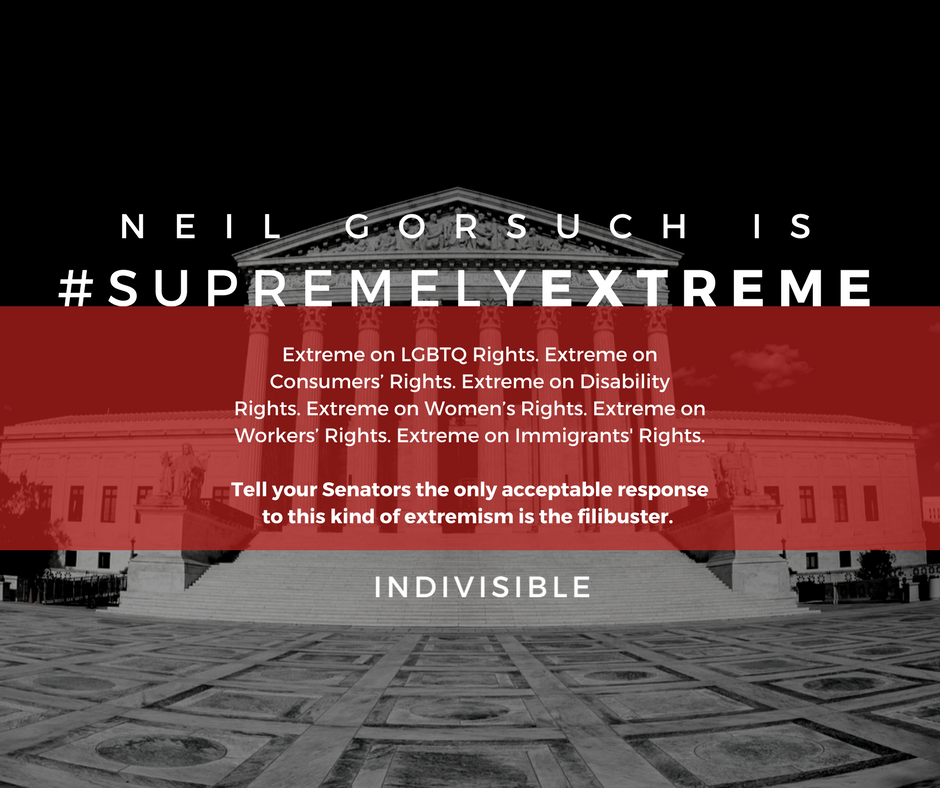 As Senator Whitehouse pointed out at the Supreme Court confirmation hearings, dark money is spending millions to make sure Neil Gorsuch is elected to the Supreme Court. When Whitehouse asked Gorsuch why that might be, Gorsuch replied innocently, “You’d have to ask them.” Whitehouse responded with “I can’t. I don’t know who they are.”

But you and I, and Senator Whitehouse, know who they are. They are ideologues, the Christian Right and big business of all varieties who love Gorsuch’s previous anti-worker, anti-woman and Citizen United-style decisions. The most famous of those being the now infamous Hobby Lobby case, where he was part of the ruling that gave for-profit corporations a right to religious freedom, allowing them to deny their workers specific healthcare services such as birth control.

Summed up, Neil Gorsuch is the perfect ultra conservative blend: he believes corporations have human rights, workers have practically none and he defends acts of injustice under his vastly broad definition of religious liberty. If confirmed to the highest court in the land, Gorsuch puts Roe v. Wade, labor rights, gay marriage, the fight to overturn Citizens United, and the battle to stop the Trump administration from destroying immigrant families and banning Muslims, at risk.

So call your members of Congress every day to tell them Neil Gorsuch is an extreme SCOTUS pick who is dangerous for American workers, women, the LGBT community and anyone the Christian Right deems less than….and that’s a lot of people.

The team over at IndivisibleGuide.com has detailed background information on Neil Gorsuch’s horrifying decisions in previous cases and scripts for calling your Congressperson about this issue. Just go to the Resources tab at IndivisibleGuide.com and select “Scripts.” The “Combat Donald Trump’s Arch Conservative SCOTUS Pick” page is currently at the top of the list. You can also spread the word about Gorsuch’s extreme decisions on social media using the #StopGorsuch and/or #SupremelyExtreme.

So, if fighting to defend the rights we have is important to you, be sure to hit the share buttons to spread the word about Stopping Arch Conservative SCOTUS Pick Neil Gorsuch via social media so that others in your network can spread the word too.

Whether we like it or not, the Supreme Court has never had so much power - but it also hinges on public trust and can be influenced by public opinion. So brace yourself - because we’re going to be screaming in the streets for a long time to come.

Gorsuch: Roe v. Wade is the 'law of the land' (The Atlantic)

If We Care About Abortion, Asking Judge Neil Gorsuch His Opinion on Roe v. Wade Is Not Enough (ACLU Blog)

Attorney for "Frozen Trucker": Neil Gorsuch May Have Been Most Hostile Judge I've Ever Encountered (Truth Out)

Hear the segment in the context of Best of the Left Edition #1089: A Corporate Judicial Coup (Judge Gorsuch and the Supreme Court)