Shut Down Detention Centers: Join the #FirstTen to #CommunitiesNotCages Week of Action, March 22-26 via @DetentionWatch 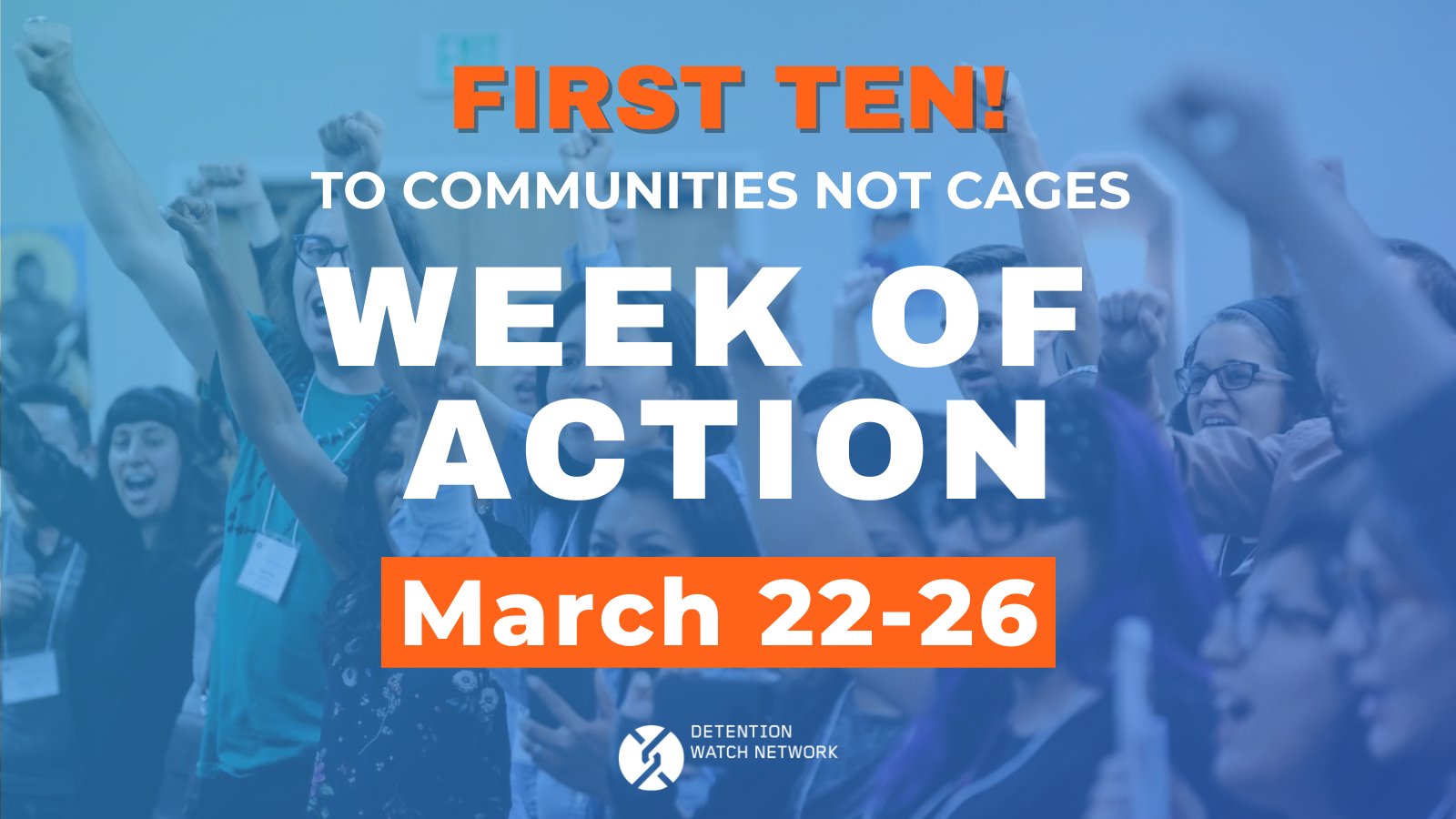 A cage by any other name….is still a freaking cage. It doesn’t matter what you call it or who is in the White House. America’s archaic and inhumane immigration system began decades ago and today is built on a network of 200 barbaric detention centers across the country managed by money-hungry contractors and ICE - an agency with such a vile history of violence, misogyny, neglect and racism, its very existence should be a crime against humanity.

Trump took advantage of this already broken and cruel system and added his own brand of evil. But, until Biden does something bold and transformational to show he’s not okay with the status quo, we are in for more nice-sounding re-namings and shuffling people’s lives around on a spreadsheet.

That’s why the immigrant rights organization Detention Watch Network is planning a week of action March 22nd to 26th to demand the beginning of the end of immigration detention in the United States.

The “First Ten” is the next phase of Detention Watch Network’s “Communities Not Cages” campaign launched in 2018. “First Ten” demands that Biden shut down ten of the most notorious ICE immigration detention facilities in the first year of his administration and end detention contracts. As Detention Watch puts it, “these ten centers are emblematic of how the immigration detention system as a whole is inherently abusive, unjust and fatally flawed beyond repair.”

The ten centers include Irwin County Detention Center in Irwin, Georgia, which recently made headlines due to reports of gynecological procedures performed without informed consent on detained women. That’s in addition to serving meager and often rotten food, as well as hosting a “work program” that exploits the labor of those detained, paying one dollar for a full day of work. Others centers on the list, like Farmville Detention Center in Virginia and Otero County Detention Center in New Mexico, have had the most COVID-19 cases during the pandemic with a well-documented history of inadequate medical care and use of disciplinary solitary confinement.

These facilities cannot stand under any administration. Abolition is the end goal, but the First Ten can and must go now.

Join in the week of action March 22nd to 26th by visiting https://www.detentionwatchnetwork.org/take-action/communitiesnotcages (or go to detentionwatchnetwork.org and select the #CommunitiesNotCages campaign in their "Take Action" drop down). If you live near one of the ten facilities, you can email Detention Watch and be connected to local campaigns leading shut down efforts. Everyone else can download the campaign toolkit, share the social media materials and videos, sign the petition, and spread the word on social media using the hashtags #FirstTen and #CommunitiesNotCages. Be sure to follow Detention Watch Network on Twitter @DetentionWatch.

And finally, if you live in Maryland, New Mexico and Washington state, help support the anti-detention legislation that has been introduced in your state this year as a result of the Communities Not Cages campaign. These pieces of legislation prevent new detention centers from being built in your states and prevent renewing existing contracts. Other states, take note.

So, if ensuring the humane treatment of our fellow human beings is important to you, be sure to tell everyone you know about Shut Down Detention Centers: First Ten to Communities Not Cages March 22nd to 26th so that others in your network can spread the word too.

Starting March 22, join the #FirstTen to #CommunitiesNotCages Week of Action to demand the Biden administration shut down all immigration detention centers and end all detention contracts, starting with the #FirstTen facilities.

“A SILENT PANDEMIC”: Nurse at ICE Facility Blows the Whistle on Coronavirus Dangers (The Intercept)

Op-Ed: Why abuse and neglect of immigrants proliferate in ICE detention (LA Times)

A Cage is Still a Cage: President Biden Must End U.S. Detention of Children and Families (TIME)