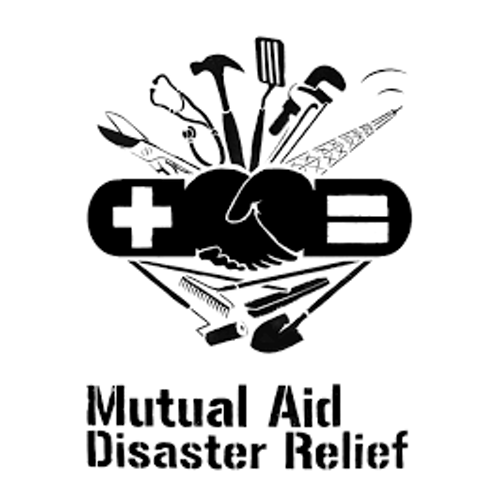 Today we’re introducing you to a disaster relief organization that is doing far more than giving out water and blankets. Mutual Aid Disaster Relief (MARD) is a US-based, decentralized, grassroots disaster relief network based on the principles of solidarity, mutual aid and autonomous direct action.

Their backstory is as inspiring as their work. In the wake of Hurricane Katrina, former Black Panther Malik Rahim engaged first aid first responder volunteers from various local activism groups and movements and established the Common Ground Clinic in his own home, giving free medical treatment to those who needed it.

With a steady influx of volunteers from activism networks around the country, they quickly expanded. These Common Ground sites housed volunteers who came to clean and rebuild New Orleans and eventually became bases of daily direct action resistance to the government’s efforts to tear down parts of the city, making way for developers. After Katrina, many of the founding volunteers went on to help form the Occupy Movement and participated in relief projects and local organizing after Hurricane Sandy. But the earthquake in Haiti reunited many of the original Common Ground volunteers and they brought medical care and assistance to Haitians under the official name Mutual Aid Disaster Relief.

So, it’s no surprise that when Hurricane Maria hit Puerto Rico, MARD was on the ground. Volunteers with MARD have been visiting the island regularly not just to help clean up but to help establish and organize sustainable rebuilding efforts and resist disaster capitalism by empowering local communities.

Their latest update from May highlighted their collaboration with a small mountain community called Barrio Mariana, where together they have just implemented the first community owned and operated solar micro-grid in the area. According to MARD, this grid will provide reliable power to what is called a Mutual Aid Center. This community center houses a solar laundromat, spaces for community meetings and workshops, a book library, a tool library, and offices for local student social workers currently developing and providing solutions for the community’s more elderly population. Locals and volunteers together have furnished the rooms at the center with beds for volunteers and plans are developing for a hostel, small business incubation, equipment sharing, and possibly a community run coffee shop.

The solar micro-grid system aims to strengthen the center, which is designed to help communities support each other when responding to a future storm. To protect it from storm damage, the grid system can be dismantled and packed back into the shipping container on which it rests. It can then be immediately reinstalled post-storm. A generator is also included as a back up supply.

Besides their relief projects, MARD recently hosted skill-share and lessons learned trainings in over 30 rural and urban communities in 12 states this past spring, and they are planning to do it again this fall in 10 western US states. You can request they visit your community or offer your skills to share with other communities on their website. We’ve included the links in the show notes. Head over to mutualaiddisasterrelief.org today and get involved or donate to help MARD help other disaster victims resist the impending doom of disaster capitalism trying to bust down their door. Sadly, we know its only a matter of time before they will be needed somewhere else.

So, if rebuilding community while resisting disaster capitalism is important to you, be sure to hit the share buttons to spread the word about Help Disaster Victims Resist Disaster Capitalism via social media so that others in your network can spread the word too.

Check out a time-lapse of our most recent solar microgrid install with Proyecto de Apoyo Mutuo Mariana and BoxPower! https://t.co/fnu1BHLxR6

About a quarter of Puerto Rico’s schools are shutting down. Here’s a look inside one. (Vox)

At Issue In Florida Senate Campaign: Who's Fighting For Puerto Rico? (NPR)

Fighting for Those Who Can No Longer Speak (SocialistWorker.org)

Hear the segment in the context of Best of the Left Edition #1190: Hurricane Maria laid bare the colonialism and capitalism in Puerto Rico