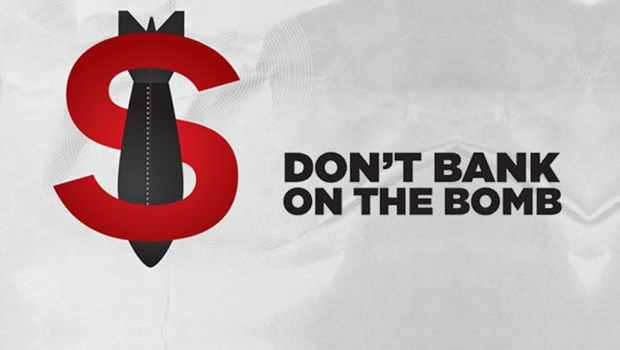 Don’t Bank on the Bomb is a regularly updated global report on the financing of nuclear weapons producers around the world. The report is produced by an organization from The Netherlands called PAX, which aims to bring together those who believe in peace and want to contribute to a just and peaceful world.

The 2016 update of the report shows that 390 financial institutions from around the world invested 498 billion US dollars into just 27 companies involved in the production, maintenance and modernization of nuclear weapons since January 2013.

Now, I’m sure you won’t be surprised to hear that about 60% of those financial institutions are U.S. institutions and they’re responsible for 68% of the total global investment. And, of course, you’ll recognize some of their names. BlackRock, Capital Group, Vanguard, State Street, Bank of America and JP Morgan Chase are the top 7 investors in the production, maintenance and modernization of nuclear weapons in the world.

So, if stopping the further investment of nuclear weapons is important to you, be sure to hit the share buttons to spread the word about Divesting from Nuclear Weapons Producers via social media so that others in your network can spread the word too.

Get guidance on divesting, download the campaigner guide, and more, on the Action page

Who Invests? (Don't Bank on the Bomb)

Who Divests? (Don't Bank on the Bomb)

Hear the segment in the context of Best of the Left Edition #1169: Playing with Winter (Threat and Effects of Nuclear War)