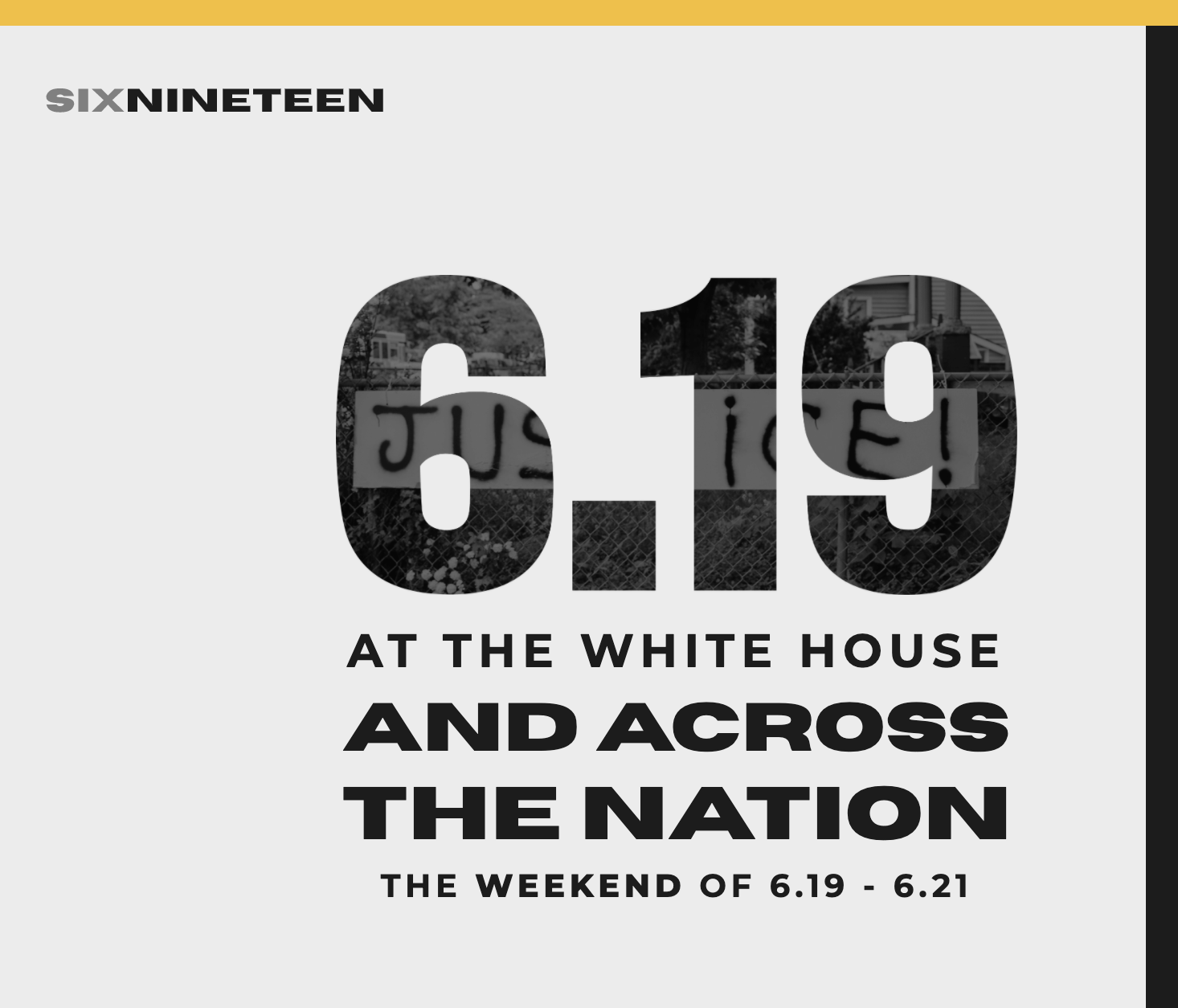 There is something different about this moment. In just a few weeks, the organic uprisings across the country and the globe are seeing results that would have seemed unfathomable only a month before.

This momentum cannot be lost, which is why The Movement for Black Lives has organized SixNineteen. Kicking off on Juneteenth, that’s this Friday, June 19th, the SixNineteen rallies will be held in communities all over the country, in front of the White House in DC and even virtually throughout the weekend.

The SixNineteen mobilization has three demands. The first is…

Defund the Police: This means the reallocation of bloated and outsized police budgets back to critical community resources such as public education, houselessness, and mental health. It’s time to rethink the role of police and center health, safety and well-being. Use-of-force regulations are important, but they are “insufficient as a solution to the problem of police violence, either incrementally or as a tool of transformation.”

The second demand is to Invest in Black Communities: The economic crisis we are experiencing now comes at the tail end of decades of divestment in Black communities and Black people. Divert wasteful spending on police militarization and invest in community based programs like healthcare, education and housing.

And the third and final demand is Call for the Resignation of Donald Trump: This one doesn’t need much explanation, but Trump has a long, well-documented history of racism and weaponizing hate. The protests have only further exposed his authoritarian, violent tendencies. It’s time for him to resign.

To join this mobilization, go to SixNineteen.com to learn more, find an event near you, or register an event you’re hosting.

Text DEFEND to 90975 to get updates on the SixNineteen action from Juneteenth and beyond. You can also follow the Movement for Black Lives on Twitter for the latest and use the hashtags #DefendBlackLives , #SixNineteen , #BlackLivesMatter , & #DefundthePolice on Twitter to engage.

So, if Black lives matter to you, be sure to hit the share buttons to spread the word about Join the #SixNineteen (#Juneteenth) Rallies 6/19-21 Virtually, Locally or in DC via @Mvmnt4BlkLives via social media so that others in your network can spread the word too.

It’s time. We must lay the path to freedom for future generations NOW.

Join the The Movement for Black Lives' SixNineteen mobilization: 6/19 (Juneteenth) through 6/21

Visit SixNineteen.com to find events near you, participate virtually, join the D.C. action, or register your own event

An American Uprising (The New Yorker)

What Exactly Does It Mean to Defund the Police? (The Cut, NY Magazine)

America, This is Your Chance (NY Times Op-Ed, Michelle Alexander)