Tell the Senate to Pass the #EqualityAct to Protect LGBTQ+ Rights, and More 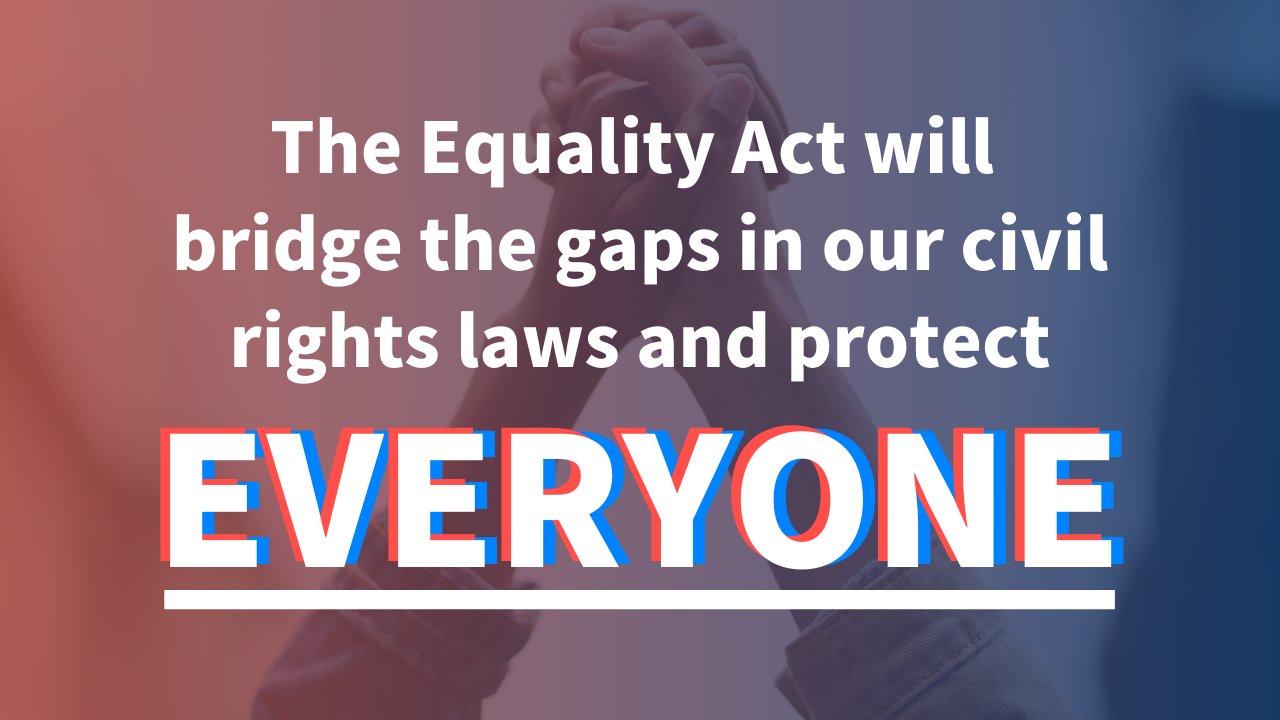 As more Republican state legislatures abuse the law to attack the rights and health of trans people - adults and children alike - it is clear we cannot wait another moment to pass the Equality Act.

The Equality Act would expand and modernize current federal civil rights law to protect LGBTQ+ people from discrimination in the workplace, classroom, public accommodations, retail stores, transportation, housing, and - maybe most dire - health care. This bill would eliminate the country’s patchwork of state-by-state protections and undermine the new cruel state laws popping up around the country.

And while that should be enough to get behind this bill, it’s worth noting that it would also close large gaps in existing civil rights laws and expand protections for women, people of color, and people of all faiths.

In 2019, three House Republicans joined Democrats to pass the Equality Act - and the same three helped pass it again in February. But in the Senate, this was always going to be a steep uphill battle. West Virginia conservative Democrat Joe Manchin is further entrenching his bad reputation on LGBTQ+ issues by flinching at the Equality Act. And Maine Republican Susan Colins recently withdrew her support for the bill after losing the endorsement of the Human Rights Campaign and after embracing a notorious local anti-LGBTQ+ group during her reelection campaign.

Even with Manchin and Collins on board, once again protecting the rights of millions of Americans comes down to ending the Senate filibuster. It is the essential broken record of this moment, so be sure to check out the end-the-filibuster pressure campaigns we highlighted in Best of the Left Episode #1411: "Our Democracy is Filibusted, Time to Kill the Filibuster

As always, we must do many things at once. You can get involved in building support for the Equality Act by visiting PasstheEqualityAct.com. Click the "Take Action" button to learn about the upcoming Lobby Day on April 21st and the #EqualityTime virtual phone bank. This national campaign was launched by a coalition of organizations, like the Transgender Legal Defense & Education Fund, the National Center for Transgender Equality, the National Black Justice Coalition, the National Women’s Law Center, and more.

So, if expanding and entrenching equality as the law of the land is important to you, be sure to hit the share buttons to spread the word about Telling the Senate to Pass the #EqualityAct to Protect LGBTQ+ Rights, and More via social media so that others in your network can spread the word too.

The #EqualityAct would win important protections for LGBTQ Americans. That’s why hundreds of organizations, advocates, and individuals have come together to win this fight and pass the #EqualityAct today!

Hundreds of organizations, advocates, and individuals have come together to win this fight and pass the #EqualityAct because they know that it is the best way to ensure equal protections for LGBTQ+ people.

Why the Equality Act Is So Important (Rolling Stone)

Beautiful, sacred and powerful: Inside the roller coaster fight for trans kids in Arkansas (Reckon South)

Hear the segment in the context of Best of the Left Edition #1412: Trans People as Disposable Chess Pieces in a Despicable Political Game