No War With Iran: Jan. 25th International Day of Action via CODEPINK 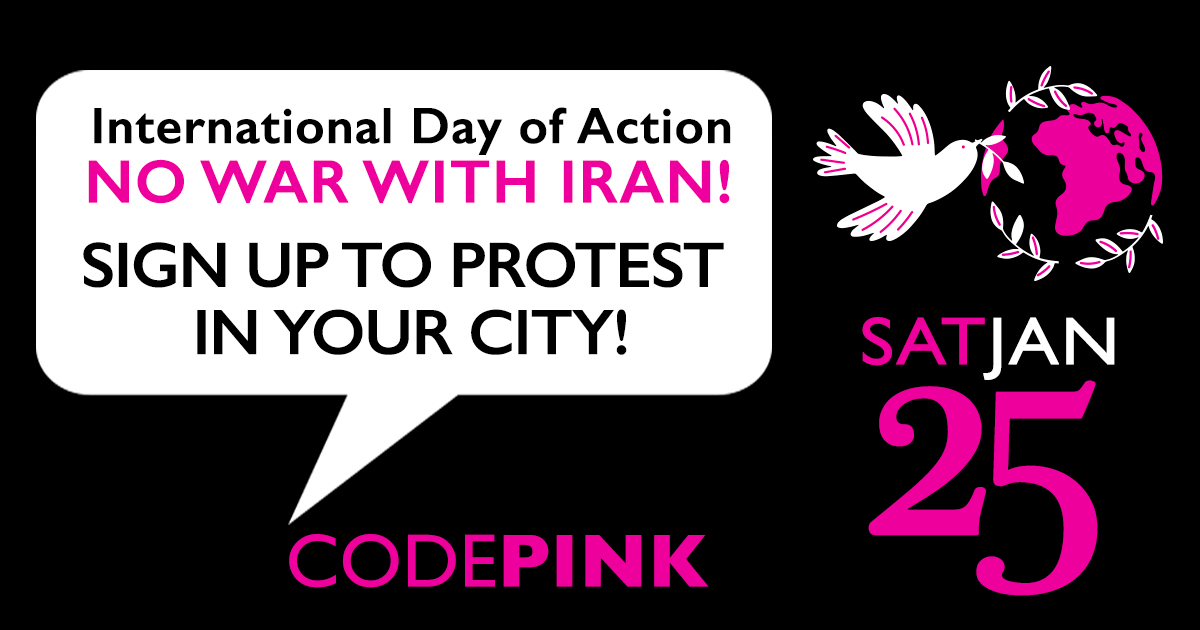 Over the years, many of you have asked us “What happened to the peace movement?”

The answer is it’s still very much alive and it needs your support now more than ever.

Since the day the news broke that Trump ordered the assassination of Iranian Major General Soleimani in Iraq, the anti-war organization CodePink has sounded the alarm and organized immediate protests against potential escalation and war with Iran.

This Saturday, January 25th, CodePink is leading a coalition of over a hundred organizations in an International Day of Action to demand “No War With Iran.” Protests will take place across the US and in fourteen other countries, including Canada, the UK, and multiple countries in Europe.

Their message is clear: The people of the world do not want Trump to drag the US and its allies into a war with Iran that could engulf the whole region and “could quickly turn into a global conflict of unpredictable scope and the gravest consequences.” Basically, we have to stop World War III.

For weeks, CodePink has also been urging Americans to call and write their members of congress to tell them to support Senator Tim Kaine’s War Powers Resolution. If passed with veto-proof votes in the Senate, it could prevent Trump from taking any further military action in Iran without congressional approval. The Senate vote likely happened just before this episode went out, but the result will determine the course for future public demonstrations and direct action.

To find a “No War With Iran” rally near you this Saturday, January twenty-fifth, visit CodePink.org, Be sure to follow the latest updates on twitter @codepink and via the #NoWarWithIran.

So, if preventing another catastrophic US-led war is important to you, be sure to spread the word about the January 25th International Day of Action to Stop War With Iran via social media so that others in your network can spread the word too.

Find a Jan. 25th "No War With Iran" International Day of Action rally near you

Hear the segment in the context of Best of the Left Edition #1330: Facing an Irrational Foe (Trump escalates tension with Iran)