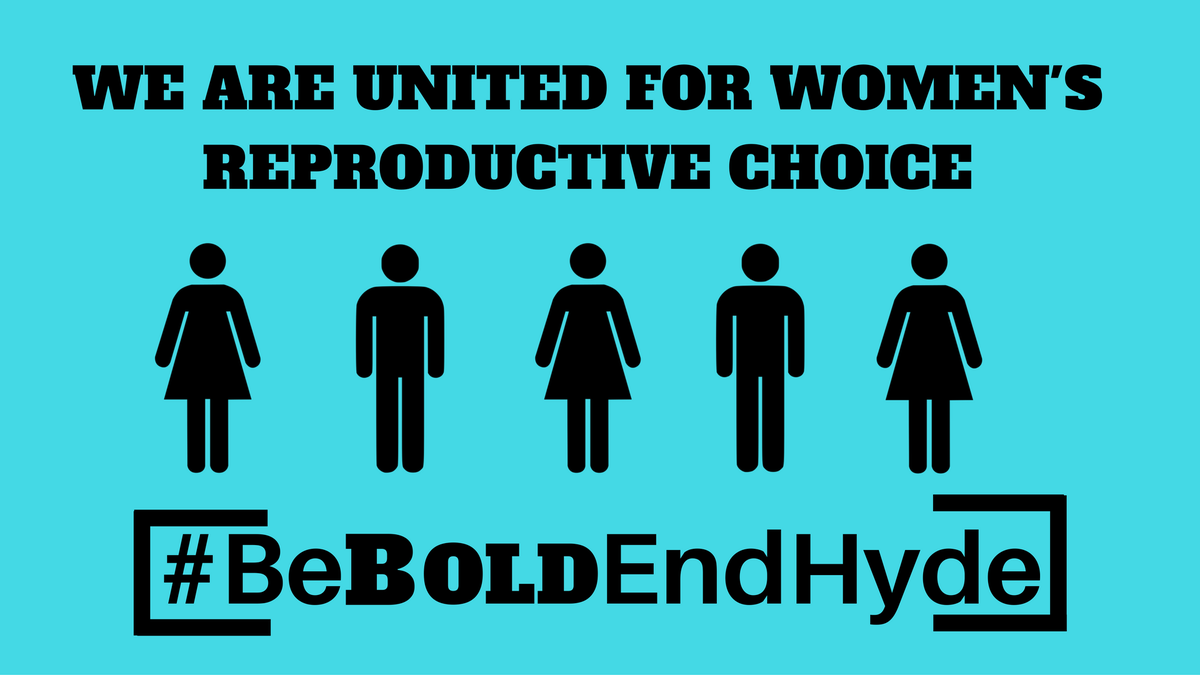 We know this story all too well. Forty years ago, a rich white man wrote and passed a law that negatively impacted the health and welfare of women in poverty for decades to come…and of course, it disproportionately harms people of color, immigrants, the LGBT community, young people and rural communities.

Thanks to Mr. Hyde and his “Hyde Amendment,” it is against the federal law for government funds to cover even one cent of the cost of a safe, legal abortion - effectively putting abortion out of reach for millions on Medicaid. As Maine state Senator Dave Miramant wrote this month, “The U.S. Supreme Court affirmed women’s rights to choose for themselves when to start a family back in 1973. But a right isn’t really a right when it’s dictated by how much money you make.”

Right now, nearly one in six women of reproductive age are enrolled in the federal Medicaid program. Fifteen states currently have policies that provide state Medicaid coverage of an abortion, but 60% of women on federal Medicaid do not live in those states. And it’s important to note that Transgender people are living in poverty at four times the national average with Medicaid as their only option.

But Hyde is not just harming those on Medicaid. It has provided a path for anti-choice politicians to add abortion coverage and funding bans to appropriations language that restricts Medicare and Children’s Health Insurance Program enrollees, federal employees and their dependents, Peace Corps volunteers, Native Americans, women in federal prisons and detention centers - including those detained for immigration purposes - women who receive health care from community health centers, survivors of human trafficking and low-income women in Washington, D.C.

The organization All Above All is leading the fight to end the Hyde Amendment. Not only are they educating the country about the devastating impacts of Hyde with fact sheets, videos and articles, but they are taking direct action on the state and local level to pass resolutions that would allow abortion coverage. Visit allaboveall.org and click “Act” to sign up, find resources and join in on state and local actions near you. You can also engage by spreading All Above All’s resources and facts on social media and using the hashtag #BeBoldEndHyde to encourage politicians to stand up for the reproductive rights of those in poverty.

For the first time, repealing the Hyde Amendment is part of the Democratic Party’s platform, but it is up to us to hold them to it. We encourage you to make fighting for reproductive justice part of your theory of change by getting involved in the long term with organizations like All Above All, Planned Parenthood, the Center for Reproductive Rights, NARAL Pro-Choice America and other organizations fighting to provide everyone with the reproductive healthcare access and coverage they deserve.

So if making sure people can make their own healthcare decisions is important to you, then be sure to hit the share buttons to spread the word about Keeping the Pressure on Congress to Be Bold and End the Hyde Amendment via social media so that others in your network can take action too.

Share All Above All resources on social media with #BeBoldEndHyde

What Women Do When They Can't Afford an Abortion (Broadly.vice.com)

What are your state's laws when it comes to abortion coverage? (AllAboveAll.org)

Term And Partial Birth Abortions: The Mythical Arch-Nemeses Of The Anti-Choice Movement (HuffingtonPost.com)

Written by Best of the Left Communications Director, Amanda Hoffman.

Hear this segment in the context of the latest Best of the Left Edition #1052: The policies we have vs. the policies we need (Reproductive Rights)