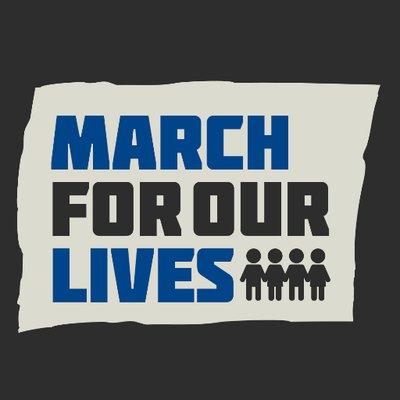 In a time where a month of the news cycle feels like a year, the Parkland student activists have continued to hold court.

On March 14th, the one month anniversary of the Marjory Stoneman Douglas High School shooting, students across the country - even some elementary school students - took part in a National School Walkout. Some students took part despite threats of suspension and detention by school administrators. In Pennsylvania, over 200 students were given Saturday detention for participating in a walkout and then performed a sit-in at that detention while wearing Parkland victims names.

Ahead of the walkout, the admissions departments of many colleges and universities publicly announced that retribution students face in response to peaceful, lawful activism would not negatively affect their applications. This, of course, only gives solace to college-bound students, though it was a positive sign of general support.

But maybe most encouraging of all was a meeting that took place earlier this month with Parkland students and  students from inner city Chicago. Parkland student activist Emma Gonzalez tweeted the following about the meeting:

“Yesterday, the members of A March For Our Lives got to meet up with some of the most wonderful and most strong spoken students of Chicago. "Florida's safest city" and one of the cities in America most affected by gun violence came together to share stories, ideologies, and pizza. Those who face gun violence on a level that we have only just glimpsed from our gated communities have never had their voices heard in their entire lives the way that we have in these few weeks alone. Since we all share in feeling this pain and know all too well how it feels to have to grow up at the snap of a finger, we were able to cover a lot of ground in communicating our experiences. People of color in inner-cities and everywhere have been dealing with this for a despicably long time, and the media cycles just don't cover the violence the way they did here. The platform us Parkland Students have established is to be shared with every person, black or white, gay or straight, religious or not, who has experienced gun violence, and hand in hand, side by side, We Will Make This Change Together.”

As far as legislative progress, Florida has increased the age limit for purchasing a gun from 18 to 21, implemented a 3 day waiting period for all firearm purchases, and banned bump stocks. But at the same time, the legislature funded arming some public school employees and refused to ban semi-automatic weapons - even just the AR-15. The Parkland students have expressed their frustration saying they feel like they only got “one point” in a game.

Again, a reminder that this has all happened in only one month.

The March for Our Lives is this Saturday, March 24th and there are now over 800 events taking place worldwide. Though the largest march will be in DC, if you can’t make it there you can easily find a sibling march near you by going to MarchforOurLives.com and entering your country or zip code.

Besides marching, perhaps one of the best things you can do to support this movement is by donating to help support the logistics of this demonstration so that more people can make their voices heard. If you personally know students who want to take action, consider paying for their gas, driving them there yourself, offering your home as a safe place to stay if they have to travel to march, or taking them to pre-register or register to vote. Remember that these are kids and they still need support from adults in their communities. We’ve failed them on gun reform before they came into this world, let’s be damn sure we don’t fail in helping them make real change now.

So, if helping the youth continue to seize the moment on gun reform is important to you, be sure to hit the share buttons to spread the word about Helping Students March for Their Lives on March 24th via social media so that others in your network can spread the word too.

Find a March for Our Lives event near you

Support the March for Our Lives - Donate

Purchase the song “Shine” written and performed by members of the Marjory Stoneman Douglas Drama to support Shine MSD - a nonprofit founded to encourage survivors of violence to express themselves through art.

Drive them to a march. Buy their gas. Whatever it takes, support all kids marching today (The Guardian)

The Students of Stoneman Douglas (60 Minutes)

Hear the segment in the context of Best of the Left Edition #1172: The cultural legacy from the way The West was won (Gun Culture)