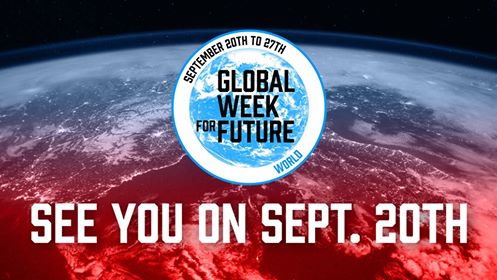 It’s hard to believe that the Sunrise Movement has only been around for two years. The youth-led climate activist organization has been an incredibly effective force in a time of cowardice and inaction.

Their latest win was getting the Democratic National Committee to agree to vote on whether or not to have a climate focused primary debate at the DNC national meeting in San Francisco, August 22nd to the 24th.

To keep the pressure on and ensure that vote goes the right way, Sunrise just announced that nearly 1,200 people have already signed up to rally at local DNC offices across the country leading up to the meeting. Sunrise will also be sending 1,000 people to Detroit, Michigan to make sure their voices are heard at the second DNC primary debates at the end of July. Watch parties are also being organized to flood social media with climate questions for debate participants.

To join this growing force, head over to sunrisemovement.org for all of the ways you can take part and check out the hashtag #climatedebate.

“Starting on Friday [September 20th] we will kickstart a week of climate action with a worldwide strike for the climate. We’re asking adults to step up alongside us. There are many different plans under way in different parts of the world for adults to join together and step up and out of your comfort zone for our climate. Let’s all join together, with your neighbours, co-workers, friends, family and go out on to the streets to make your voices heard and make this a turning point in our history.”

This week-long action would be the first ever global climate strike with the goal of disrupting “business as usual” to demand attention for the climate emergency. So save the dates of September 20th to 27th and go to globalclimatestrike.net to learn more, find events near you, or organize one yourself.

It’s time to put real action behind that old Greek proverb: “Society grows great when old men plant trees whose shade they know they shall never sit in.”

So, if demanding action on the climate emergency before it’s too late is important to you, be sure to hit the share buttons to spread the word about Demanding a DNC Climate Debate & Joining the Global Climate Strike This September via social media so that others in your network can spread the word too.

Demand a #ClimateDebate via Sunrise Movement

How to stand with climate strikers (350.org)

Young people have led the climate strikes. Now we need adults to join us too (The Guardian)

It’s official: The DNC is considering a climate debate (Grist)

This Is Why We Need A Climate Debate (HuffPost)

Hear the segment in the context of Best of the Left Edition #1290: The world is rising in rebellion against climate inaction