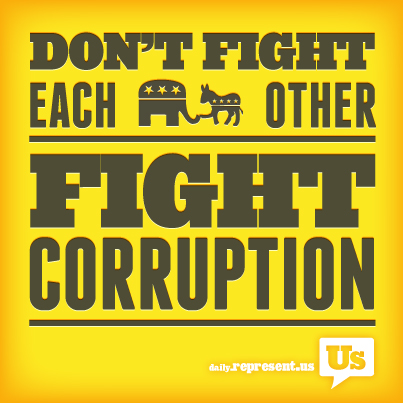 We’ve all spent much of the last few years lamenting the increasing polarization of our country, so it’s easy to forget that there is still one thing that most Americans agree on: getting corporate money OUT of politics. In poll after poll, the vast majority of democrats, independents and republicans, oppose the Citizens United decision and see special interest lobbying and election spending as negatively impacting our politics.

And that is what makes our current reality all the more troubling.

We had the largest mass shooting in US history this year, but Congress is trying to pass NRA- approved gun legislation. We’ve seen devastating damage from some of the strongest hurricanes in history this year, but Trump and Republicans have rolled back environmental protections at fossil fuel industry’s request. We’ve barely recovered form the Great Recession of 2008 and yet our government continues to let the banks run wild and deregulate Wall St. It’s all so wildly out of touch with how Americans feel that we’re actually seeing Republicans just flat out admitting that they’re doing their donors bidding. As they failed to defend their scam of a tax bill, Representative Chris Collins said, on television, “My donors are basically saying, ‘Get it done or don’t ever call me again.’”

If there was a ever a time to join forces and come together, it’s now. There are many groups fighting money in politics, but each of them have a slightly different approach. Here are a few we suggest…

First up, Wolf PAC, founded by The Young Turks, is going state by state to call for a Constitutional Convention. They believe that a new Constitutional amendment is the only way to stop money in politics and level the playing field. You can join up with a chapter in your state and learn more at wolf-pac.com.

Next, we have All of Us, which launched We Will Replace You dot org to target corporate democrats, has recently announced that they’ve merged with Justice Democrats. Justice Democrats, as you may recall, is backing progressive candidates that refuse to take corporate or PAC money. Head over to allofus.org or justicedemocrats.org to get involved.

And finally, Represent.Us is fighting money in politics by putting municipal anti-corruption laws on the ballot at the local and state level. They’ve already succeeded in dozens of cities and states and are currently defending the legislation that passed in South Dakota and is now under attack. Head over to Represent.us to learn more and join the fight.

And, if you’re really hardcore, Represent.Us is hosting the Unrig the System Summit in early February in New Orleans. This 3 day event at Tulane University aims to bring together “the brightest minds from the right and left” to get money out of politics. The lineup of speakers includes MayDay PAC founder Lawrence Lessig, Cenk Uyger of The Young Turks, former White House Ethics Counsel for George W. Bush, Richard Painter, Nina Turner of Our Revolution, and Represent dot Us Board members Jennifer Lawrence and Kerry Washington. You can learn more about the summit and register at unrigsummit.com.

So, if making sure we have free and fair elections and an actual democracy is important to you, be sure to hit the share buttons to spread the word about Getting Money Out of Politics via social media so that others in your network can spread the word too.

Get money OUT of politics by getting involved with...

All of Us and Justice Democrats

Represent.Us (check out their Unrig the System Summit)

House Republican: my donors told me to pass the tax bill “or don’t ever call me again” (Vox)

4 Solutions to Fight the Corruptive Influence of Money in Politics (League of Women Voters; 2015)

Hear the segment in the context of Best of the Left Edition #1152: Rise of the oligarchy (Money in Politics)