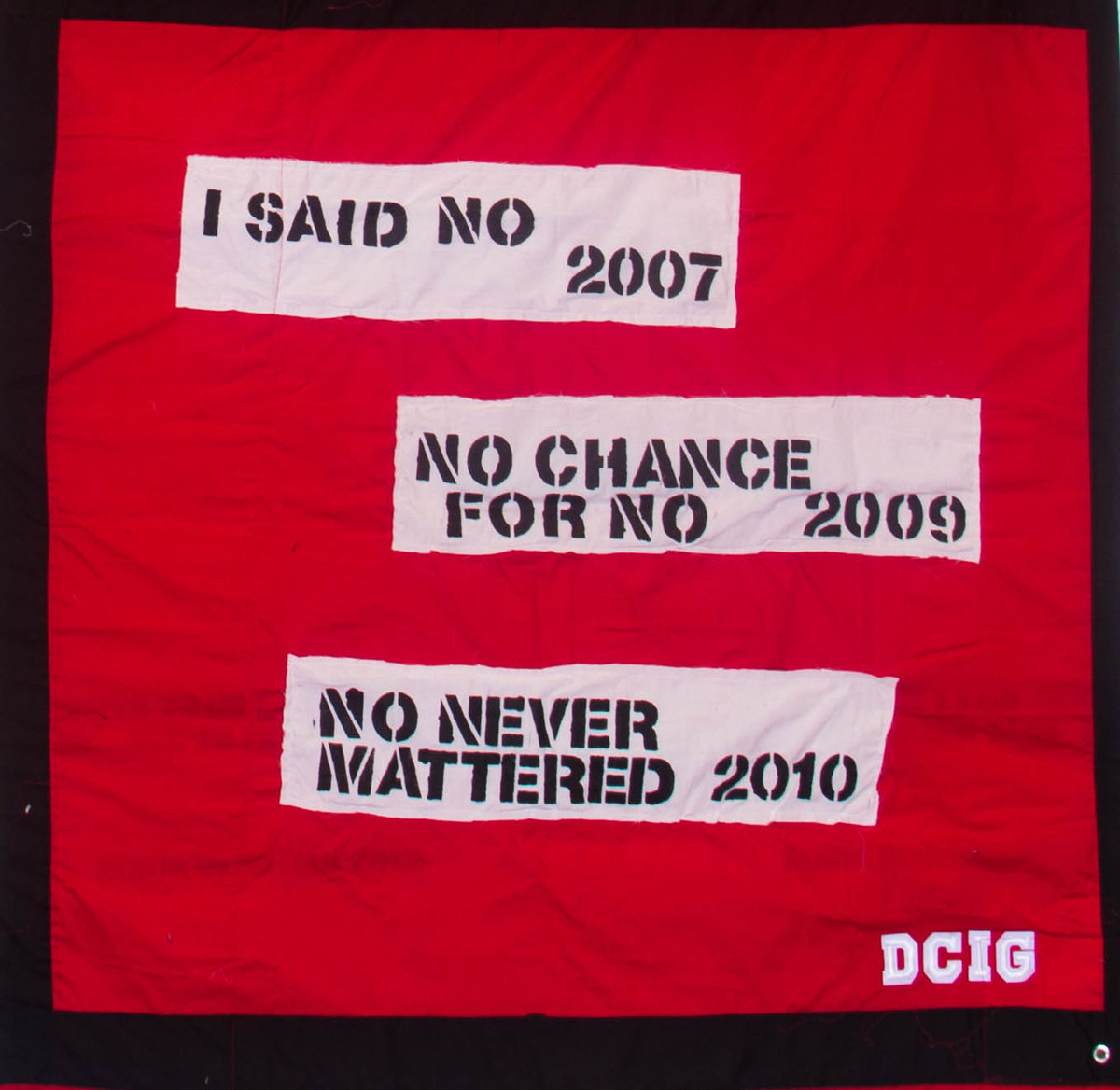 30 years ago, the AIDS Memorial Quilt was displayed on the National Mall in DC - visually representing the overwhelming devastation of HIV/AIDS and forcing the country to confront the crisis. Inspired by that first quilt, sexual assault activists have been stitching together what is called “The Monument Quilt” to achieve the same kind of awareness and action for survivors of rape and sexual abuse.

The organization behind the quilt is FORCE, a creative activist collaboration dedicated to “upsetting rape culture and promoting a culture of consent.” FORCE says the quilt will be a place of healing and that it resists the popular and narrow narrative of how sexual violence occurs by telling many stories at once, not just one.

The project began in 2013 thanks to a kickstarter campaign and FORCE tweeted this week that the quilt has doubled in size in the last year - now covering a football field. FORCE plans to display the quilt on the National Mall in the spring of 2018, and a national, year-long tour will follow. You can learn more about the quilt, view quilt squares, get information on making a quilt square, sign up to host a workshop and volunteer at themonumentquilt.org.

But this project needs materials and the corresponding workshops for healing and activism need resources to expand. That’s why on October 29th, FORCE, and local organizations fighting rape culture and sexual assault across the country, want you to join them in your community for “Hike for Healing.” Participants will hike or walk with others and raise funds for the completion of this quilt, while raising awareness about consequences of our rape culture.

To find a Hike for Healing team near you or to start one in your community, go to crowdrise.com/hikeforhealing.

The Monument Quilt is about giving a voice to many to show survivors they are not alone. In that spirit, we also strongly encourage you to check out the powerful hashtag #WhyWomenDontReport on Twitter to read survivor stories and the reasons that hold women back from reporting assaults.

As the Republican candidate for president continues to personify rape culture itself and politicians continue to defend him, we encourage you to make ending rape culture part of your theory of change by getting involved in the long term with organizations like FORCE, Ultra Violet, Planned Parenthood, No More, RAINN, and other organizations fighting to end sexism, sexual assault, domestic violence and abuse and upturn the rape culture we live in.

So if making our country face and change rape culture is important to you, then be sure to hit the share buttons to spread the word about the #HikeforHealing to Support The #MonumentQuilt for Survivors of Rape and Abuse via social media so that others in your network can take action too.

The Monument Quilt has doubled in size in the last year, blanketing a football field. Help us continue to grow: https://t.co/Add2yfmdpl

Find a Hike for Healing team near you or start one at https://www.crowdrise.com/hikeforhealing

View quilt squares, get information on making a quilt square, sign up to host a workshop and volunteer at https://themonumentquilt.org

Everyone's talking to their daughters about Donald Trump. They need to talk to their sons. (Mic.com)

The Conversation You Must Have With Your Sons (HuffingtonPost.com)

Written by Best of the Left Communications Director, Amanda Hoffman.

Hear the segment in the context of Best of the Left Edition #1051: "Consent is sexy"